The South Park Game Wiki
Register
Don't have an account?
Sign In
Advertisement
in: South Park: The Fractured But Whole, Characters, Male characters,
and 8 more

Part 4th grader, part food storage container, Tupperware became a crimefighting cyborg after an unfortunate pantry incident. Before his accident he was Token Black, but now uses his enhanced durability to absorb attacks and keep his allies feeling fresh on the battlefield.[1]

Tupperware is the alter-ego of Token Black in South Park: The Fractured But Whole.

Personality wise, Tupperware acts in a robotic-like way, expressing almost little to no emotion. However, he expresses surprise when he discovers his parents being held in the holding cells at the Park County Police Station.

A one-in-a-million pantry accident had turned Token Black into Tupperware, a cyborg superhero who has the power to construct deadly Tupper Turrets and keep the food fresh. - In-game character description

As a Cyborg archetype, Tupperware specializes in controlling the battlefield to protect his allies. His Tupper Turret is somewhat fragile, but it can rack up some extra damage on a foe, give enemies something else to focus on, or lure them into a vulnerable position. His Tupper Tornado lets him push enemies away from himself, possibly forcing Knockback Combos with nearby allies or giving him room to set up a Tupper Turret. Hot Swap acts similarly to Fastpass's Transporter ability, but with the ability to switch places with anyone (ally or enemy) and with Tupperware gaining Protection instead of healing the targeted ally; between the shield and his naturally high health, this is mainly used to pull weakened friends out of danger, put a foe in a disadvantageous position, and/or put himself in a position to soak up enemy fire.

Tupperware's biggest weakness is his relatively poor damage output; even his Ultimate is more limited in terms of damage potential than most heroes. He also faces competition from Captain Diabetes as a tank; although the diabetic superhero isn't as good at position control and defending his allies, he deals much more damage and gains Protection more easily.

Tupperware is one of the original seven members of the first-generation superheroes, and one of the first members of Coon and Friends.[2] After disagreeing on the superhero franchise plan proposed by The Coon however, he left the team and sided with Freedom Pals.[3]

Tupperware serves as the primary financial source and the tank for his team, he also created the Danger Deck as a method to train his teammates, despite this, The New Kid is still allowed to have access to it if it's paid for.

He is first introduced in the mission Civil War, saying nothing. He later joins in the fight between Coon and Friends with Mysterion and Wonder Tweek, but ends up being defeated.

Tupperware reappears in Civil War 2: Playtime's Over, accusing The Coon for stealing Doctor Timothy's phone. He then joins in the battle with Doctor Timothy, Mysterion, Toolshed and the Kindergartners (being mind controlled by Doctor Timothy). Despite the additional advantage, he ends up being defeated again.

Tupperware is present with his other Freedom Pals members on the third night at the Park County Police Station, where he almost got shot by the police officers on guard, twice. He then discovers his parents being imprisoned in the holding cells underneath. Later in that night, he encounters Sergeant Yates, who unleashes Jared from his personal holding cell, which Tupperware is forced to confront with. He also later confronts Shub-Niggurath at the pit located in the very bottom floor of the police station.

After Civil War 3 has ended with Doctor Timothy's defeat, Tupperware presses the button to reveal the franchise plan by the Doctor, and helps convince all heroes to come together.

On the next day, however, the plan is shown to be stolen, and Tupperware reaches the conclusion that the thief must have come in the night and gotten past the security grid. He then joins the others to Catch the Coon and find the New Kid’s parents.

During the mission "Farts of Future Past", Tupperware is a mandatory partner to defeat Warrior Clyde.

For the complete collection of Tupperware's quotes, refer to the page Tupperware/Quotes. 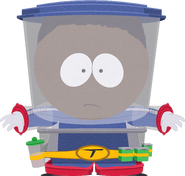 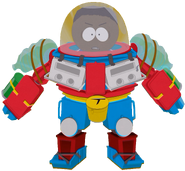 Tupperware making his appearance alongside Mysterion to Professor Chaos and The New Kid inside the Freedom Pals Base.

Tupperware performing to the senior citizens with The New Kid and Wonder Tweek.

Tupperware alongside Freedom Pals and The New Kid in front of the police station.

Tupperware nearly getting shot in the police station's lobby.

Tupperware nearly getting shot, again inside the police station.

Tupperware, being enraged for nearly getting shot at expresses his determination to bring down the corrupt cops.

Tupperware discovers his parents being locked inside the police station's holding cell.

Tupperware facing his parents after they have been released from the police station's holding cell by The New Kid.

Tupperware driven into submission after his parents threatens to spank him.

Tupperware confronting Jared on what were the cops doing to the black people after defeating him.

Tupperware discovering Sargent Yates performing the ritual to the Elder God at the bottom of the police station.

Tupperware rushing to aid Doctor Timothy after being defeated by The New Kid.

Tupperware helping up Doctor Timothy with Mysterion inside the Freedom Pals Base.

Tupperware seen next with Fastpass and Super Craig while awaiting in the front gates of Mephesto Genetics Lab.

Tupperware seen sitting beside Toolshed during the tour of Mephesto Genetics Lab.

Tupperware unlocked as a Combat Buddy.

Tupperware appearing to The New Kid if the Danger Deck DLC is accessed via the South Park Bus Stop.